In an effort driven by Kennedy Wilson Property Services, along with its leasing and construction partners, 1101 Market Street in Philadelphia was re-tenanted, renovated and rebranded on time and on budget in Q4 2019. 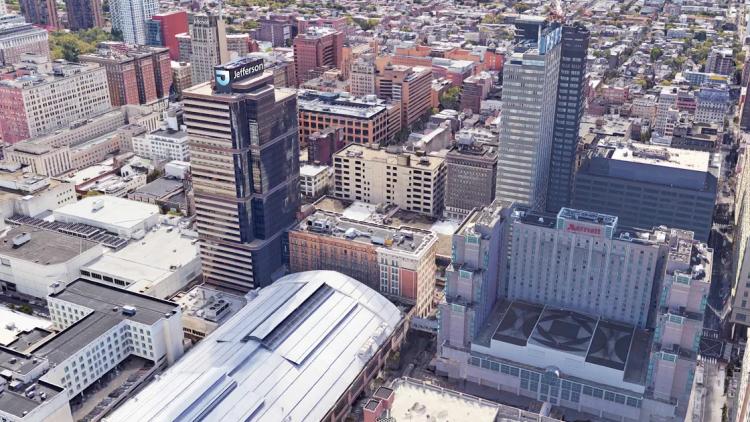 Formerly Aramark Tower, and now known as Jefferson Center, the 634,146-square-foot office tower underwent $30 million in tenant improvements and a $6 million lobby renovation in connection with the move-in of a new major tenant and the building’s namesake, Jefferson Health.

The departure of the building’s prior major tenant, Aramark Services, created a generational opportunity for ownership and the entire property team to re-imagine and ultimately reposition the asset. Local architecture firm Eimer Design was engaged to enhance the property’s position in the marketplace, and that goal was accomplished by increasing the building’s curb appeal through a dramatic portal entrance, activating the lobby utilizing timeless finishes, and ultimately providing improved access to public transit. These improvements were instrumental in securing the 237,892-rentable-square-foot transaction with Jefferson Health for use by its administrative offices.

The lease with Thomas Jefferson University, Jefferson Health’s umbrella organization, was executed in December 2017. The transition was completed with eleven months of downtime and the property is now stabilized for the foreseeable future.

Kennedy Wilson (and its predecessor-in-interest) has retained the management of this Class A asset since the mid-1980s. Throughout Kennedy Wilson’s tenure, the building has enjoyed occupancy rates in the mid- to upper-90 percent range.

Owned by the Girard Estate, a charitable trust established in 1830 for the benefit of the people of the City of Philadelphia, revenue generated by the property funds the operation of a school for children from single parent/guardian households.